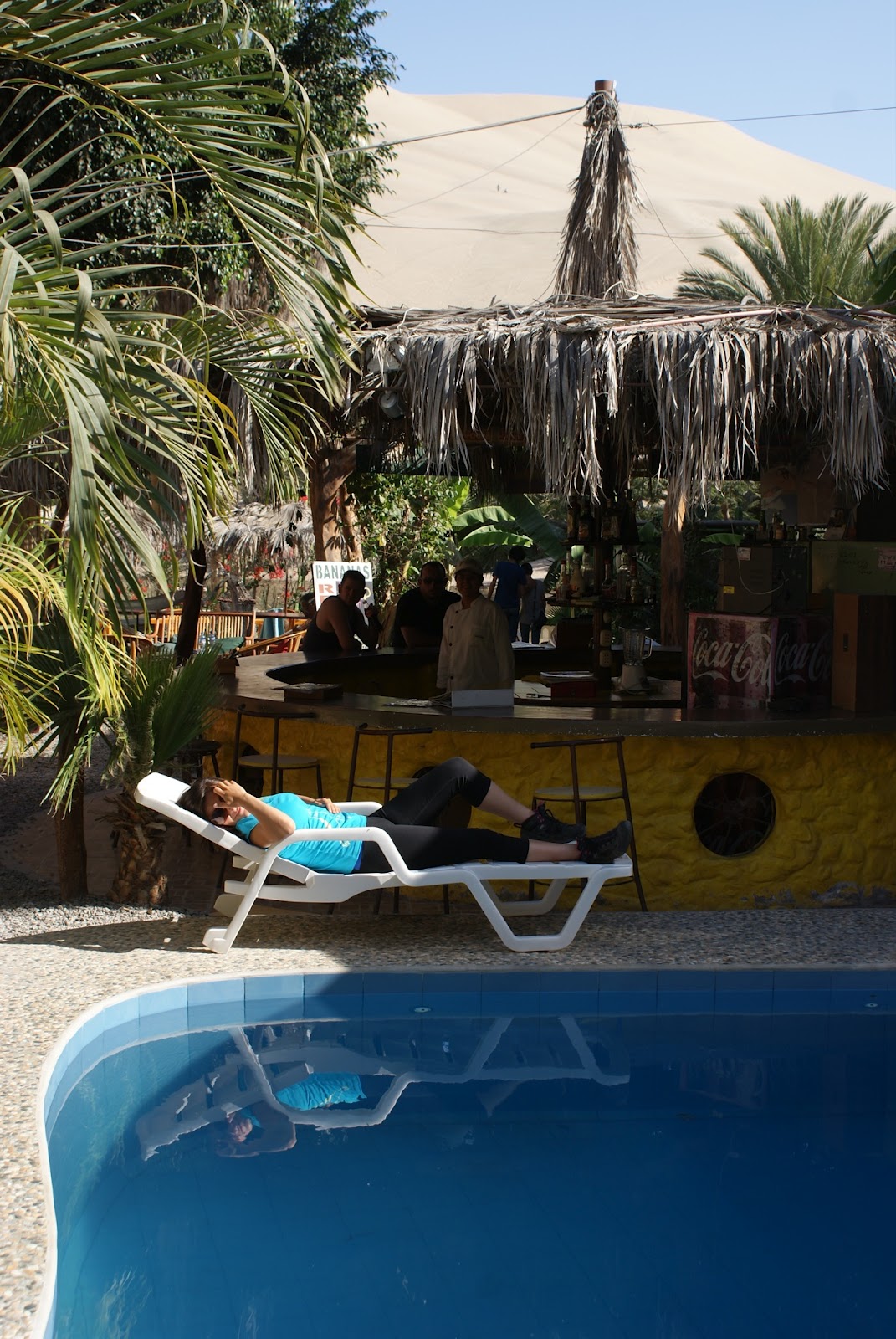 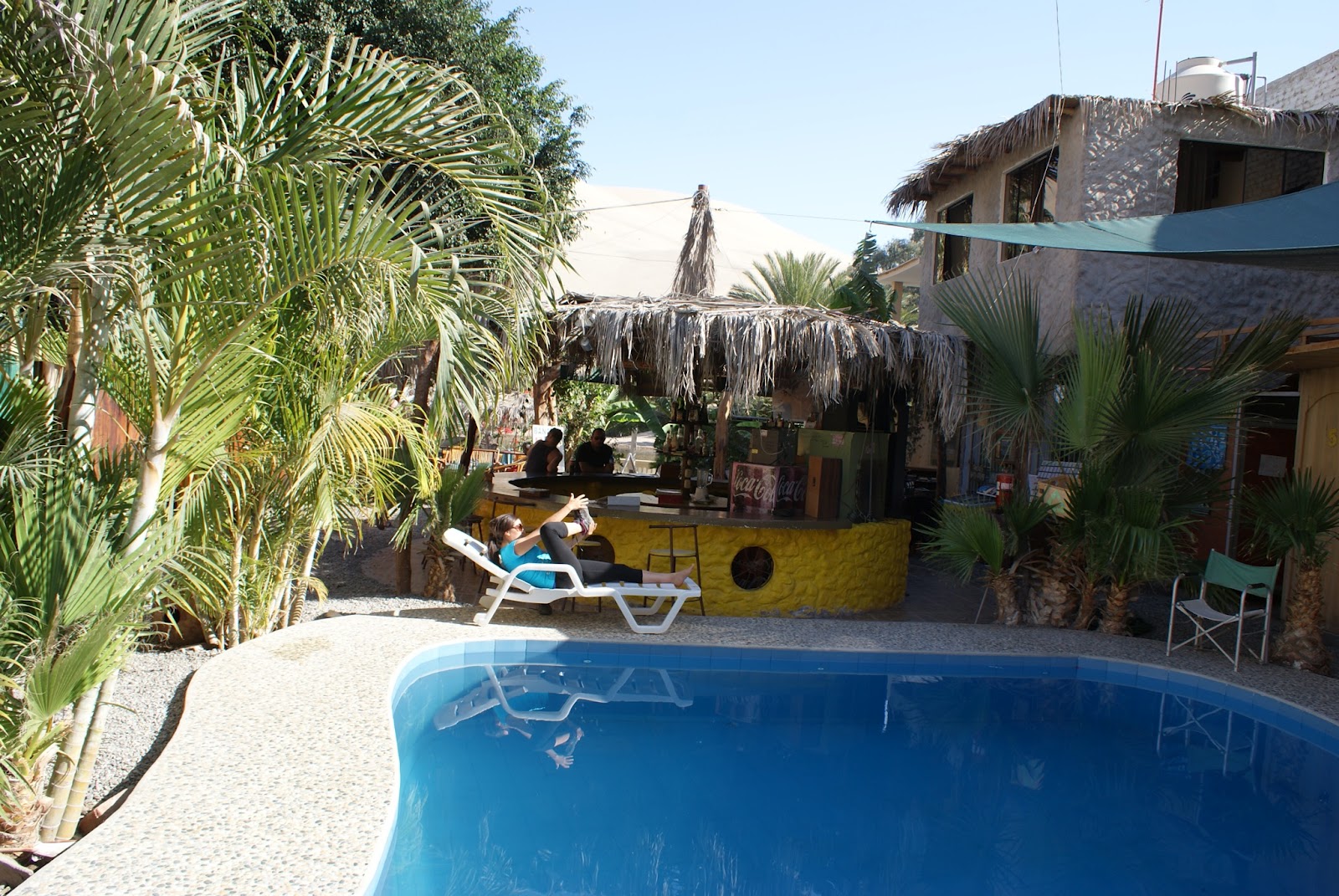 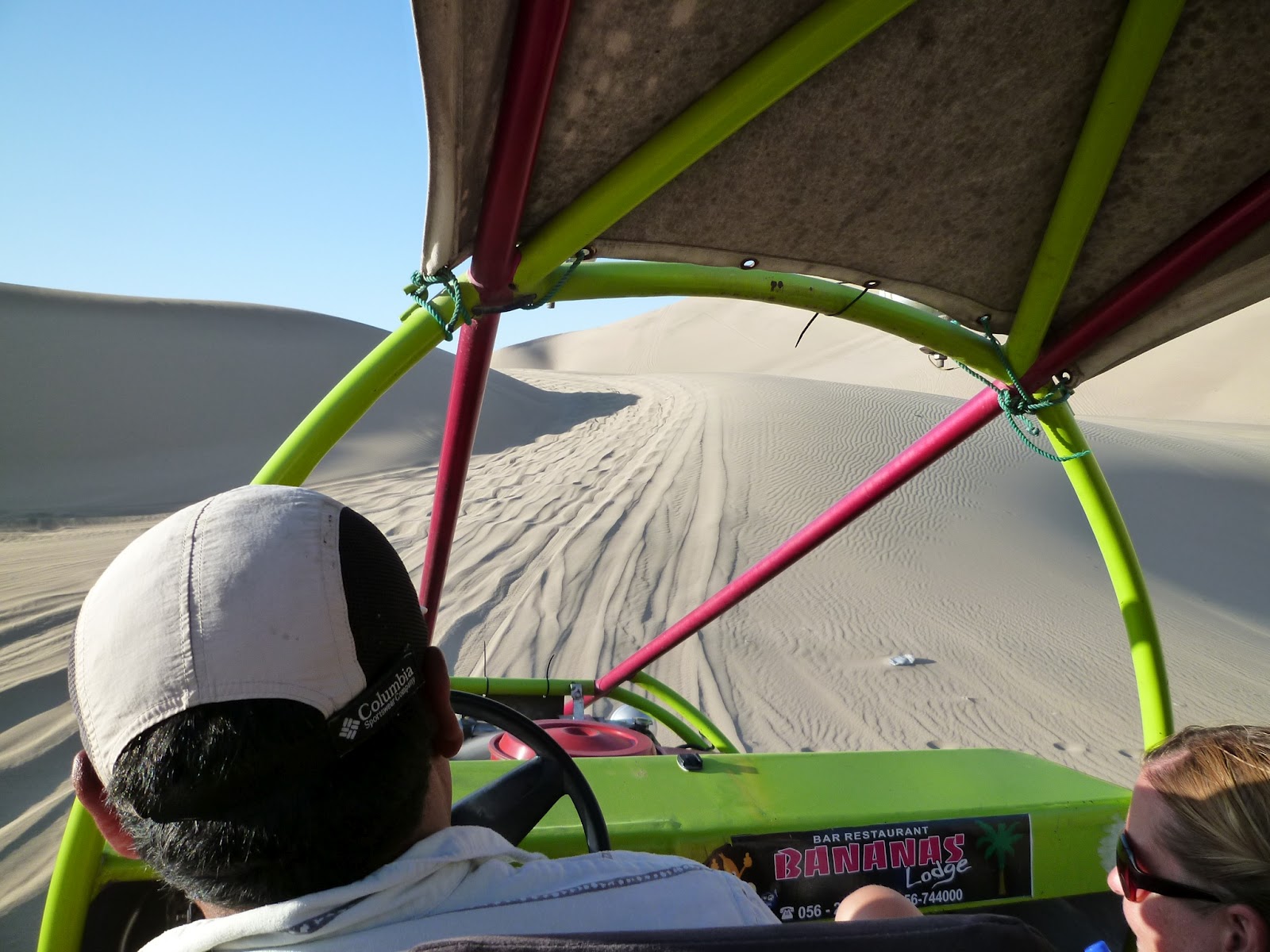 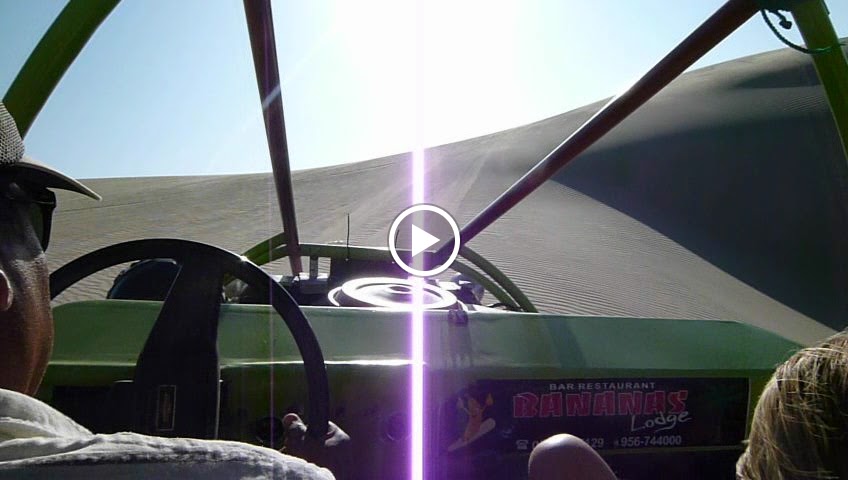 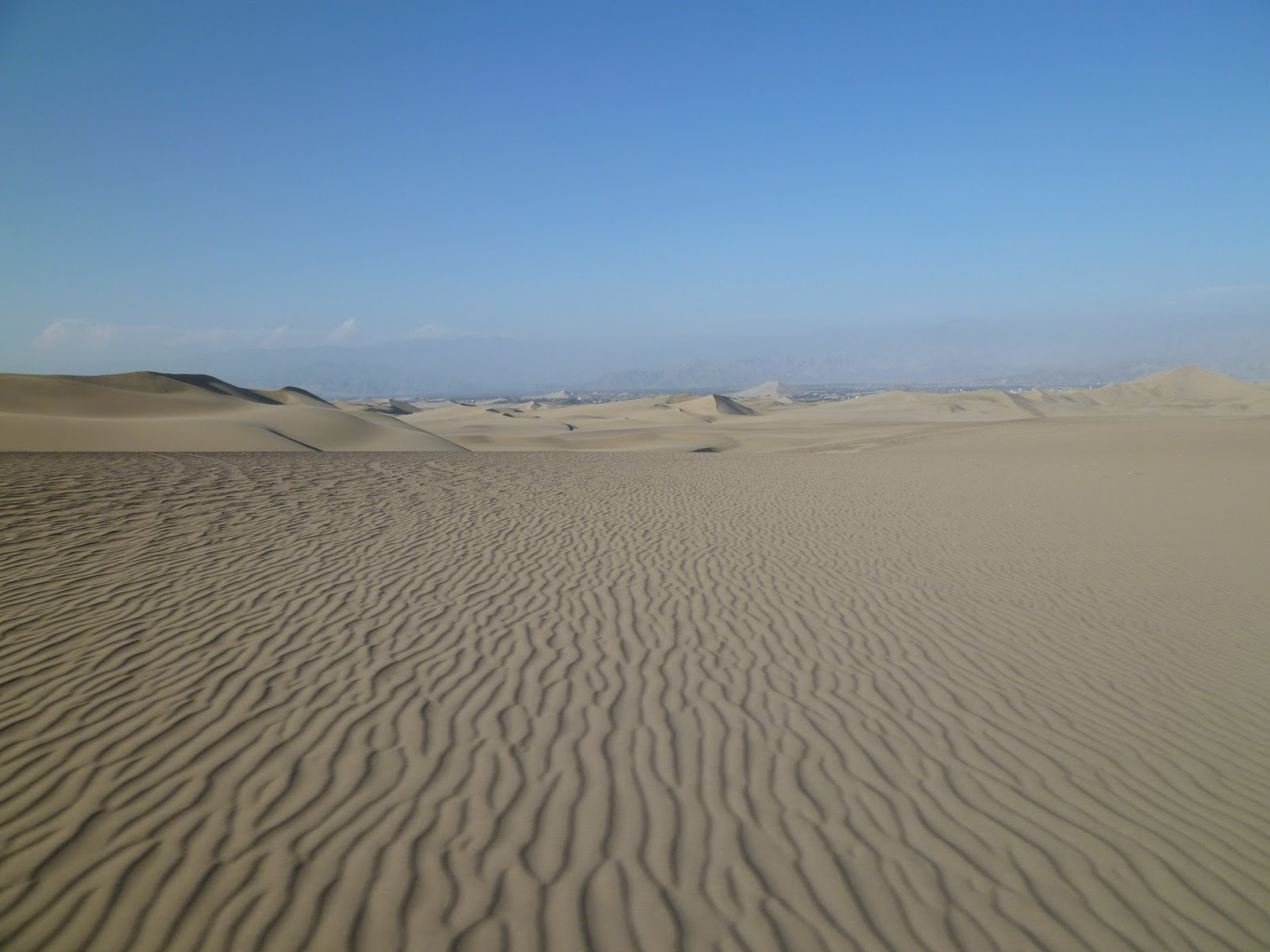 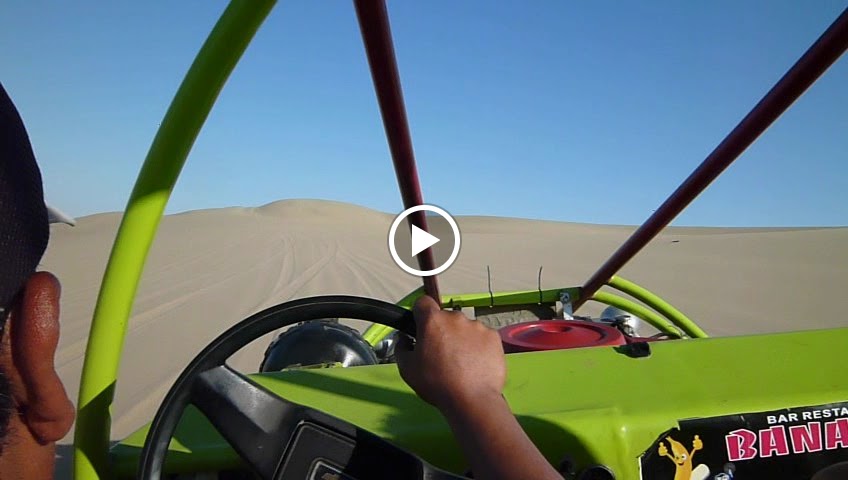 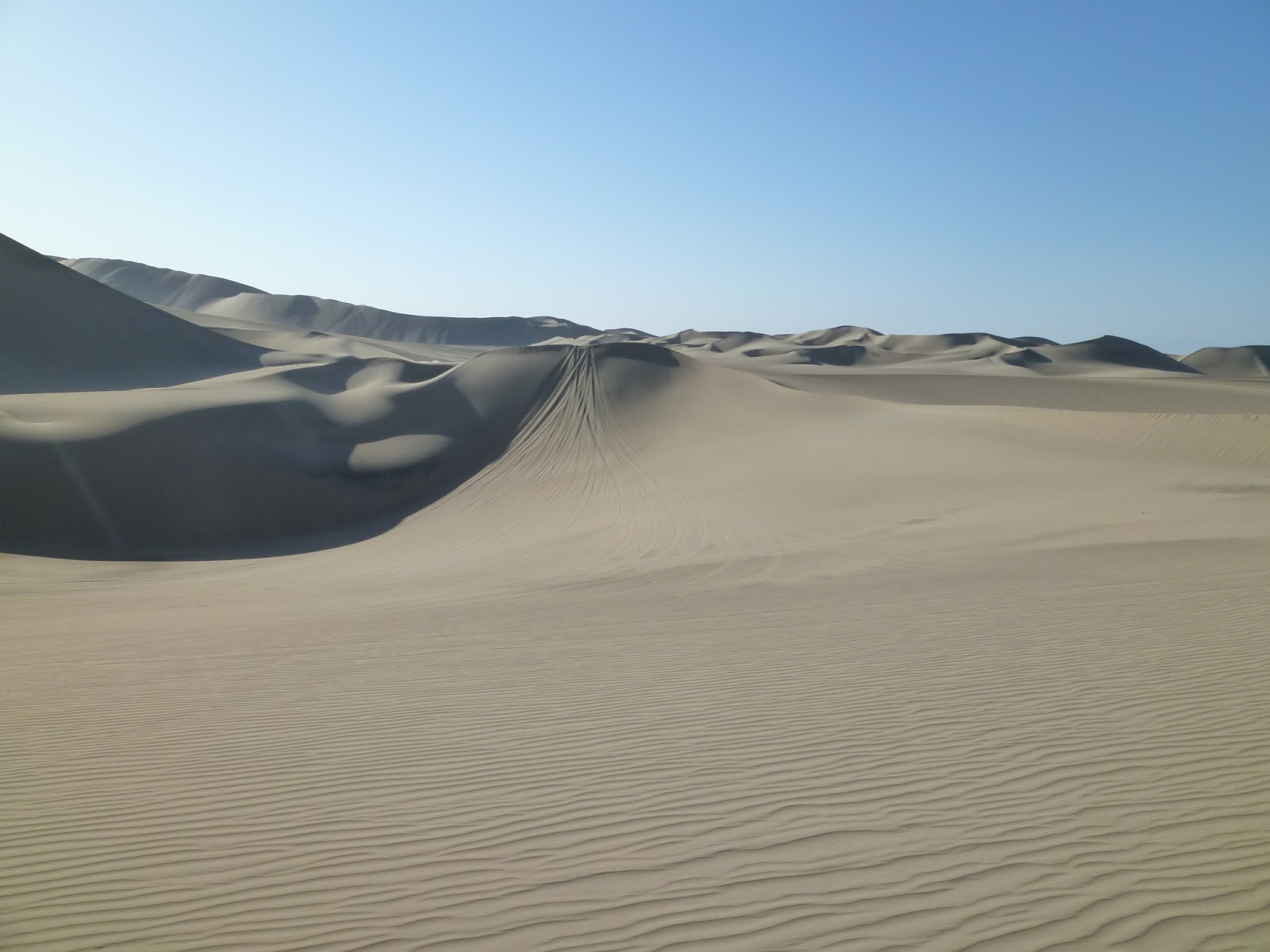 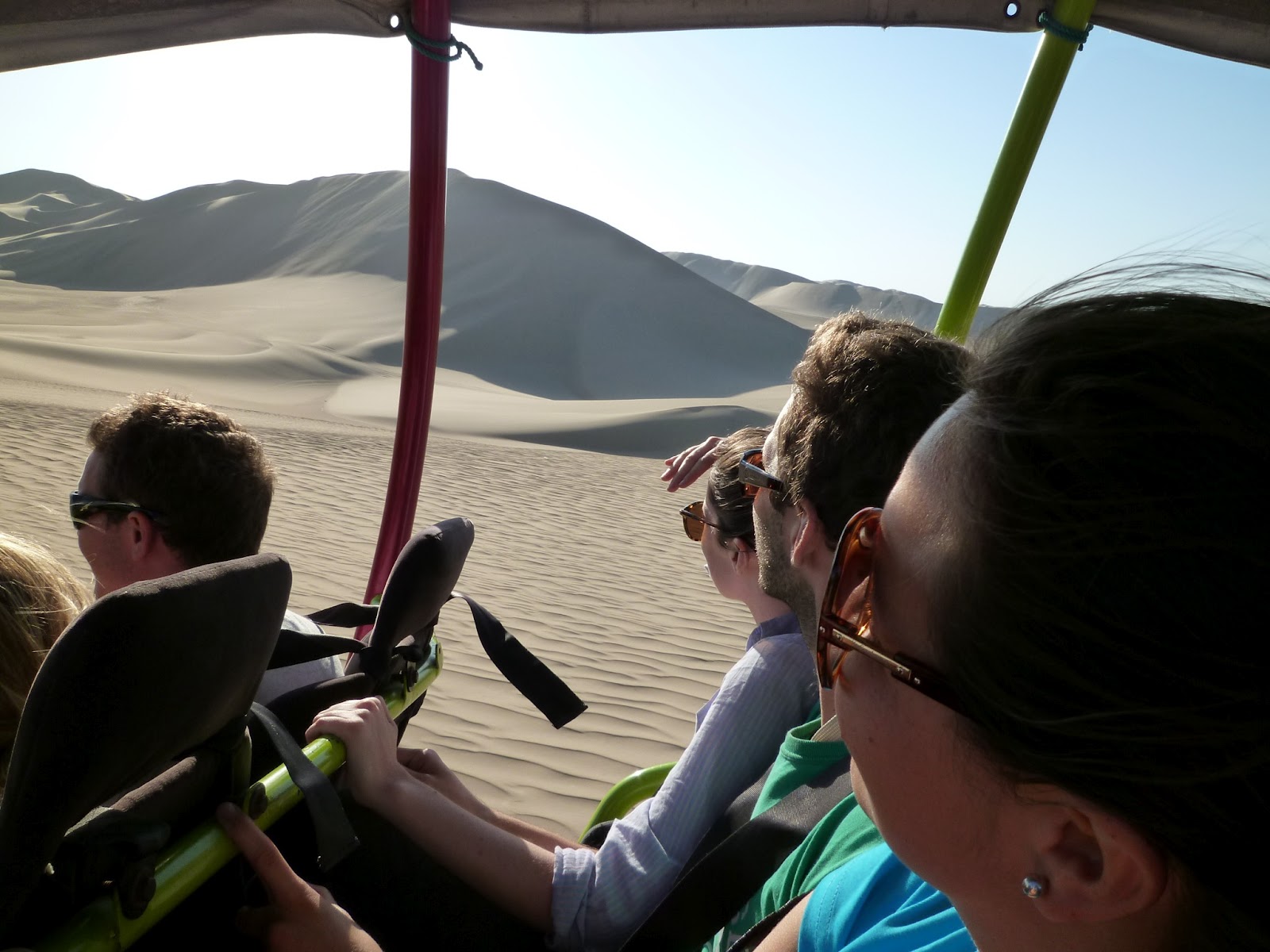 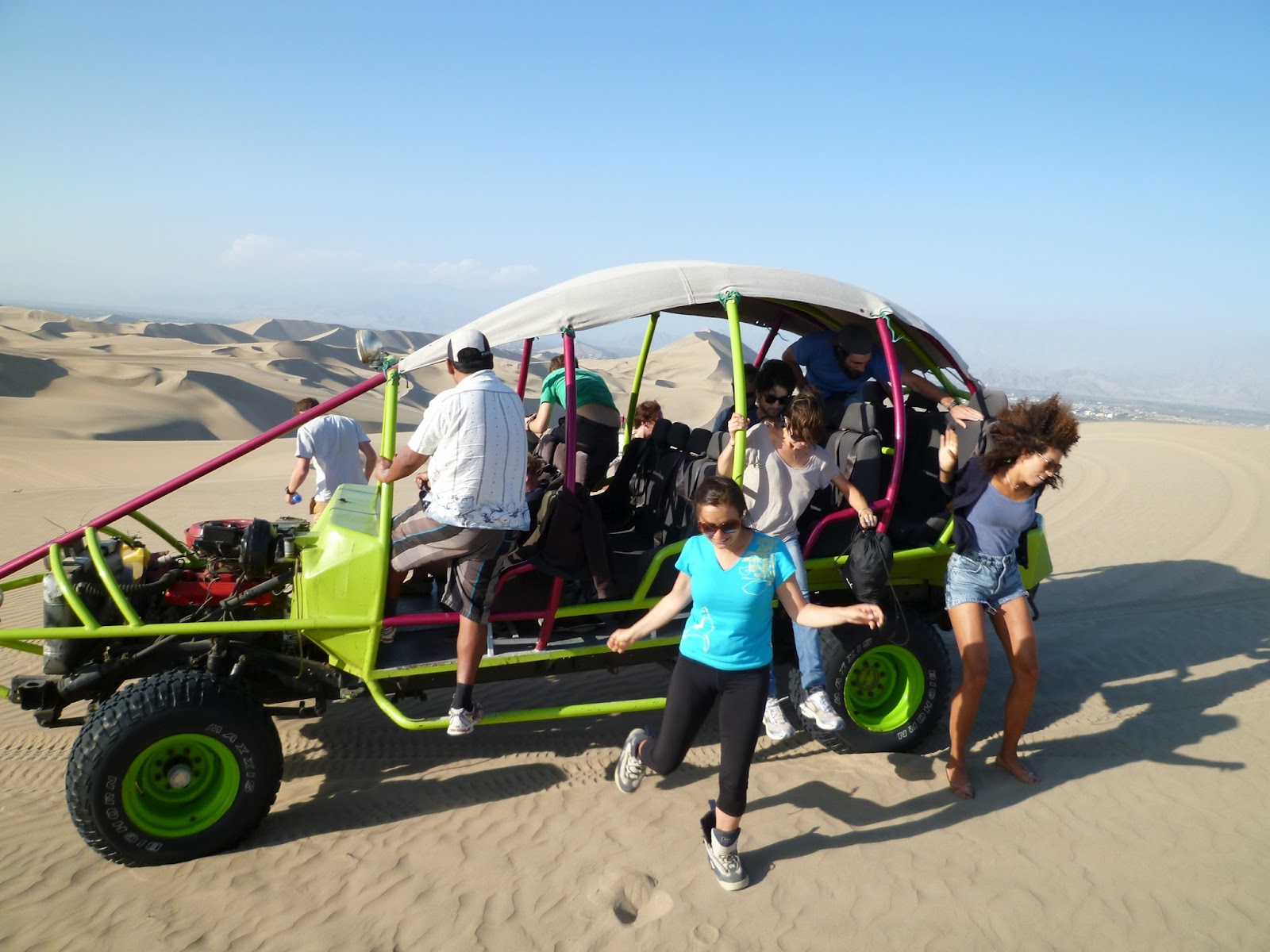 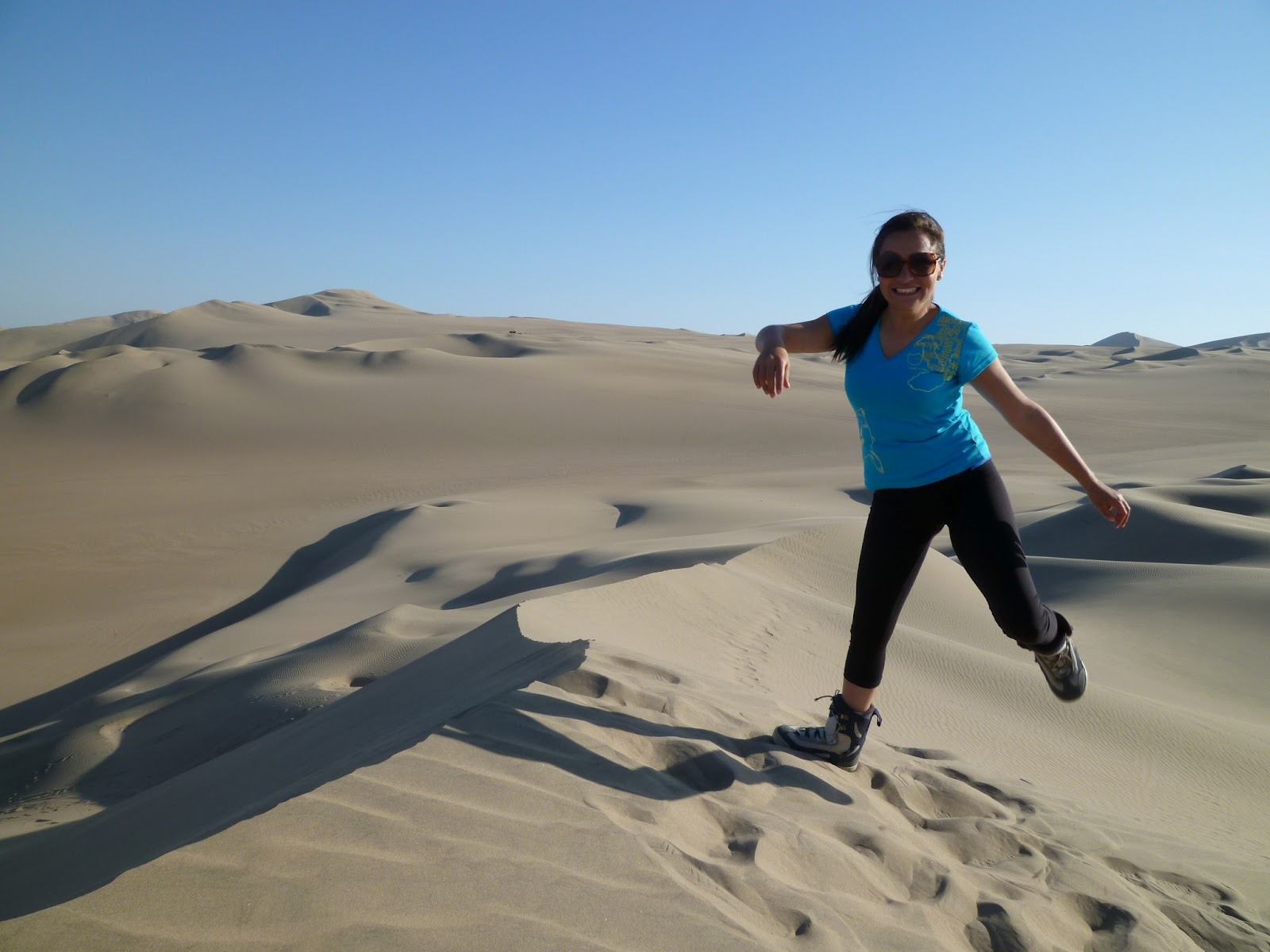 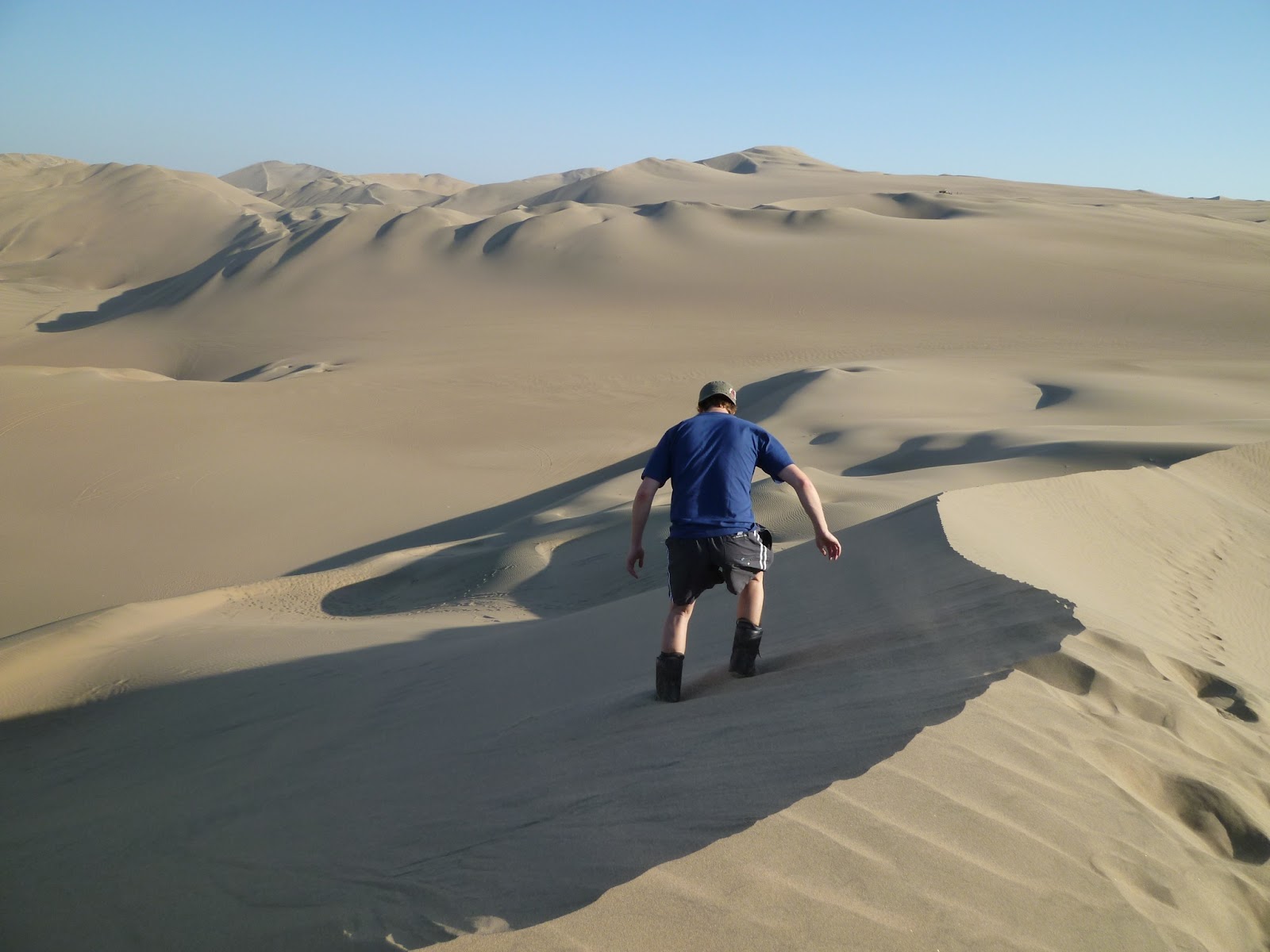 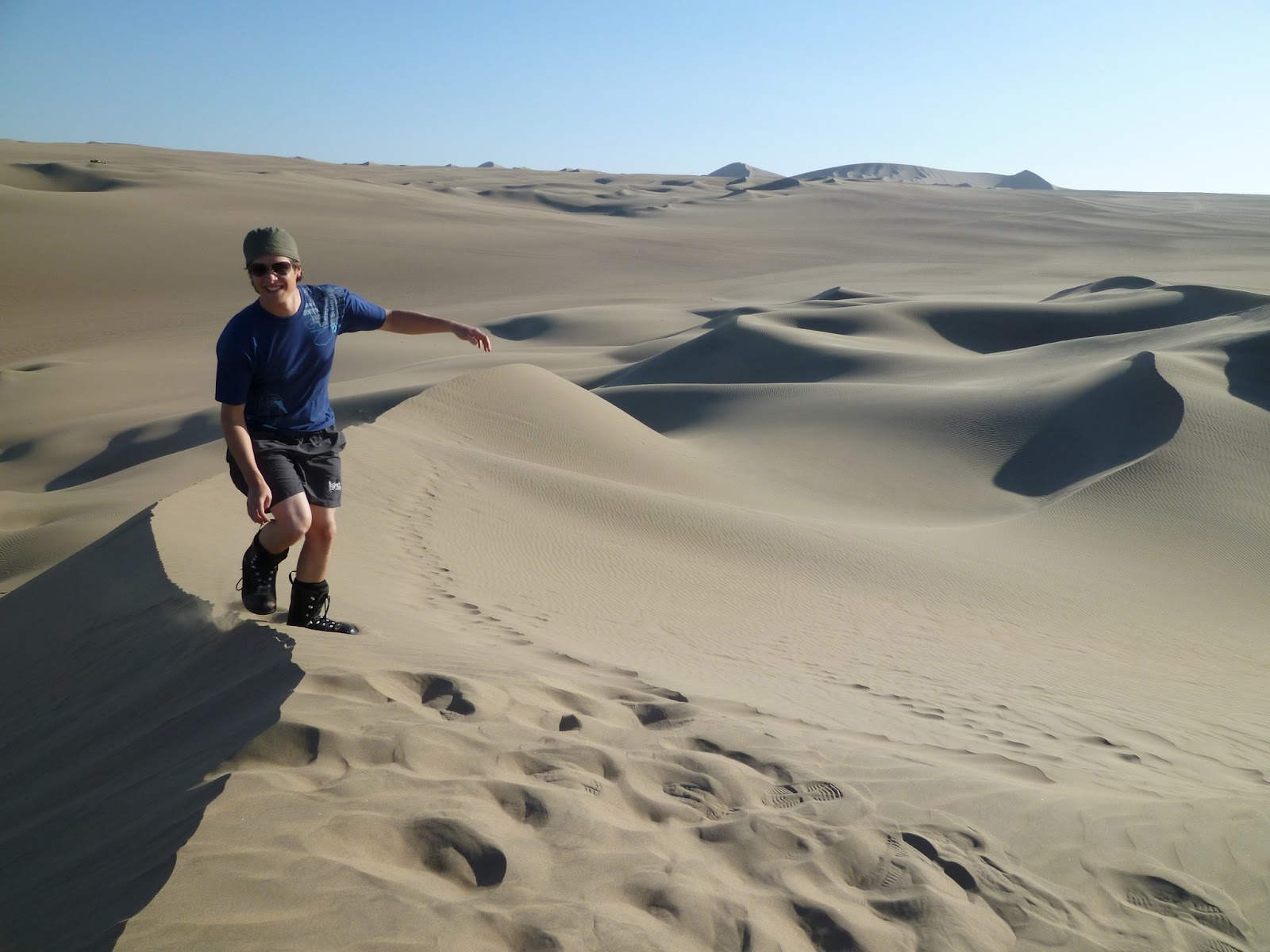 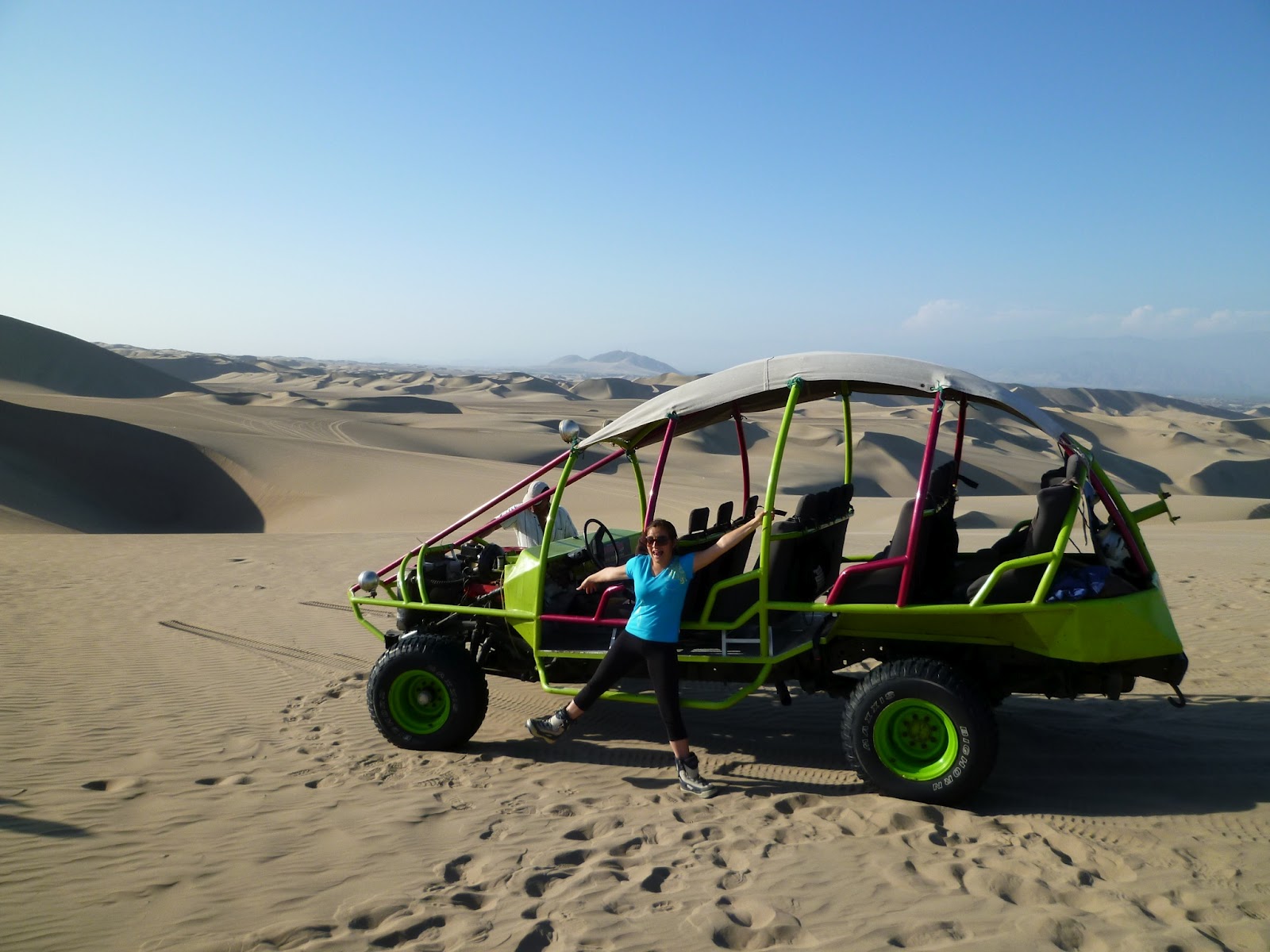 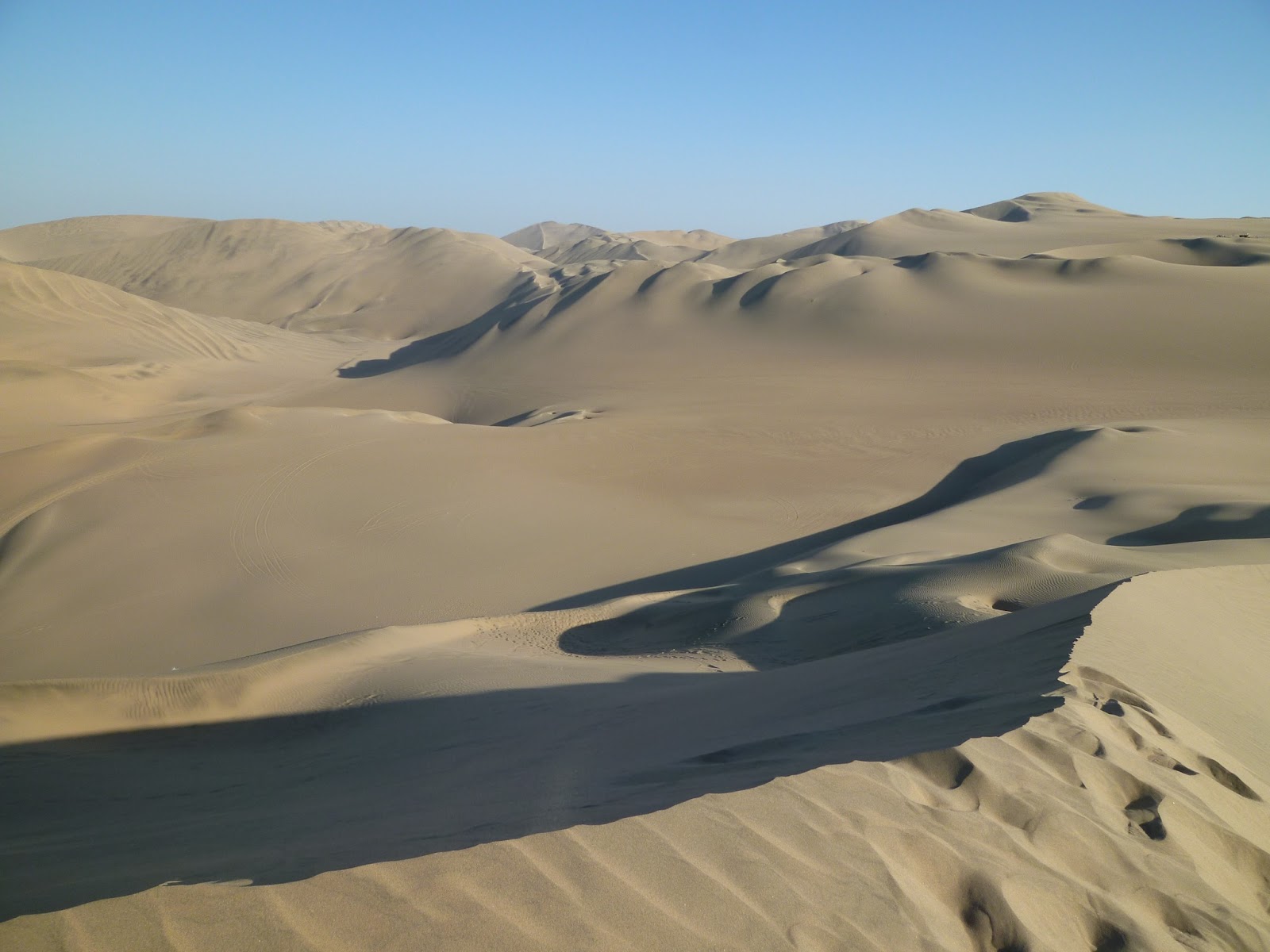 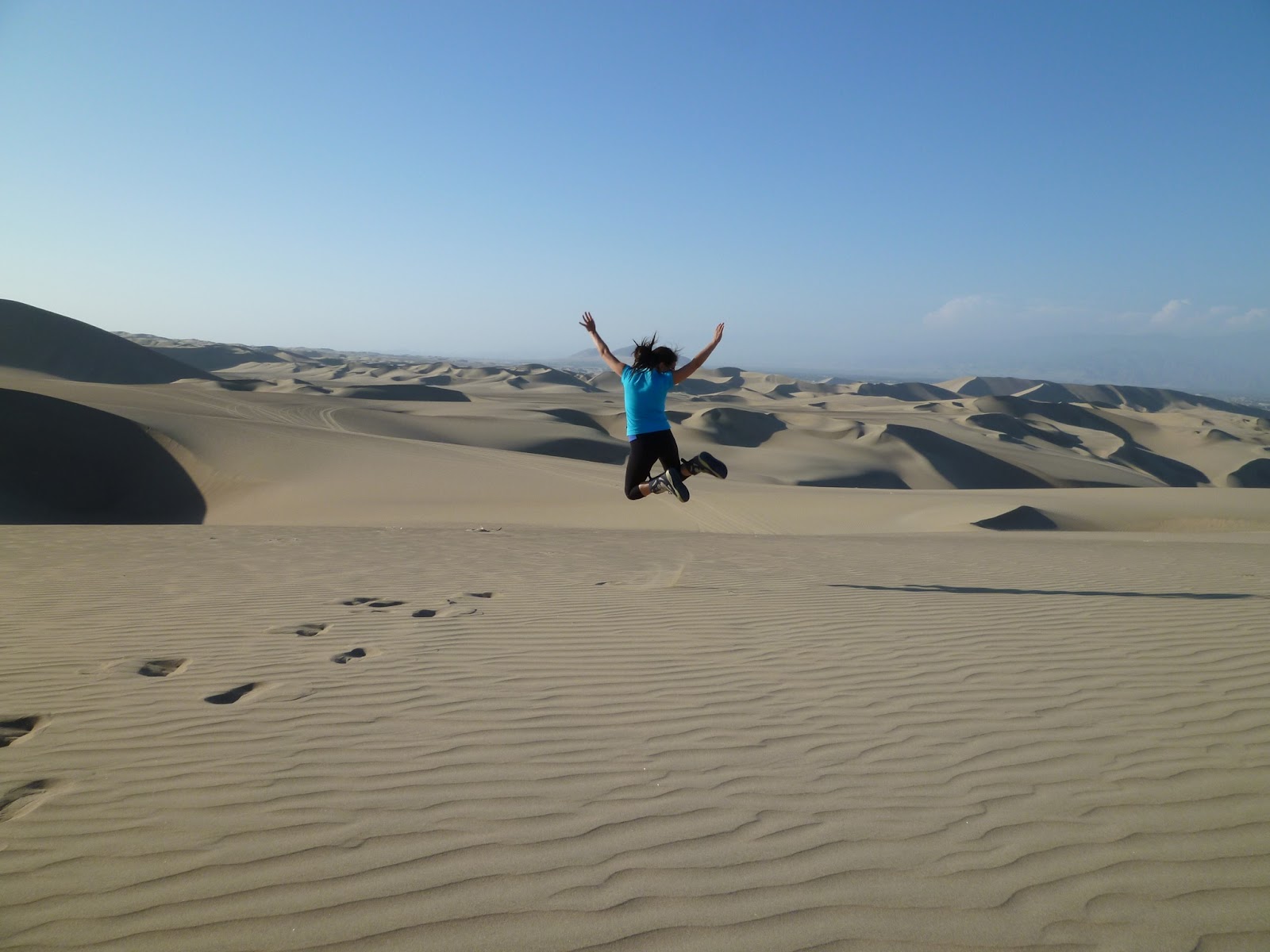 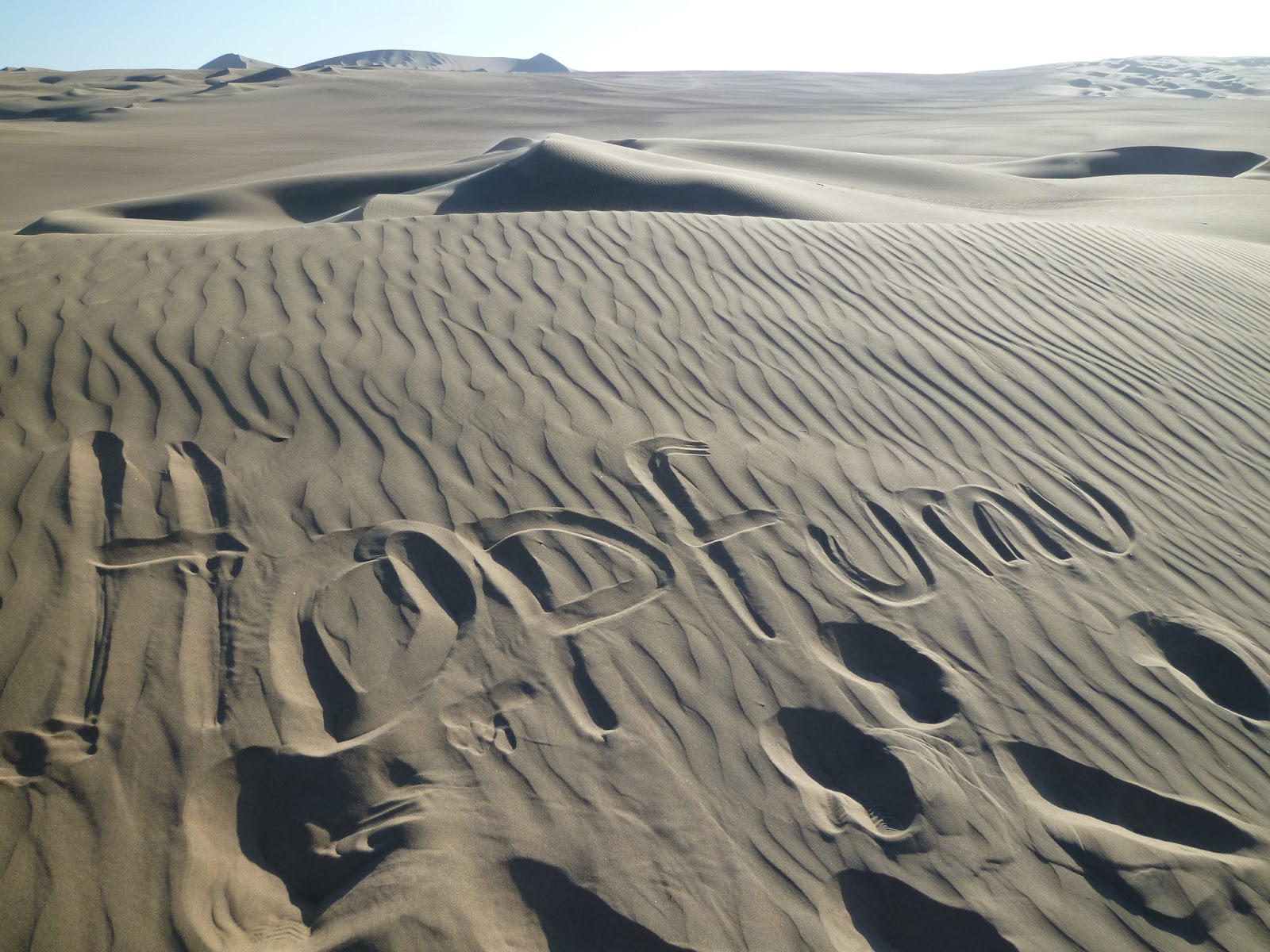 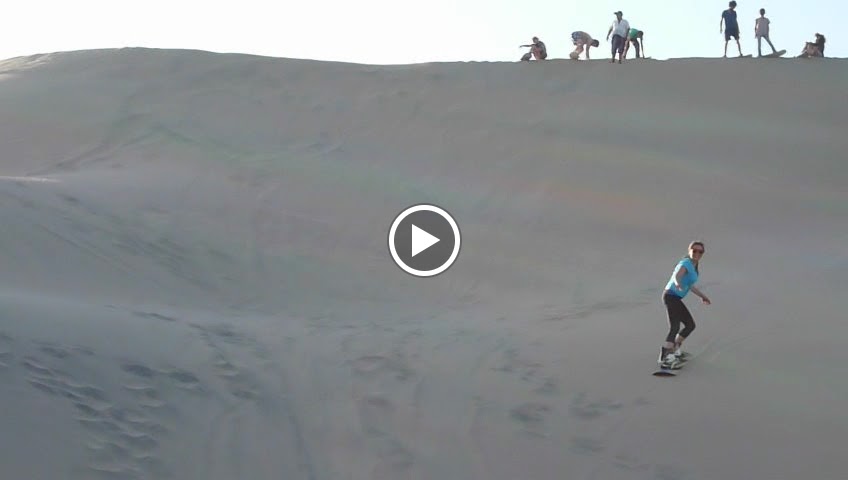 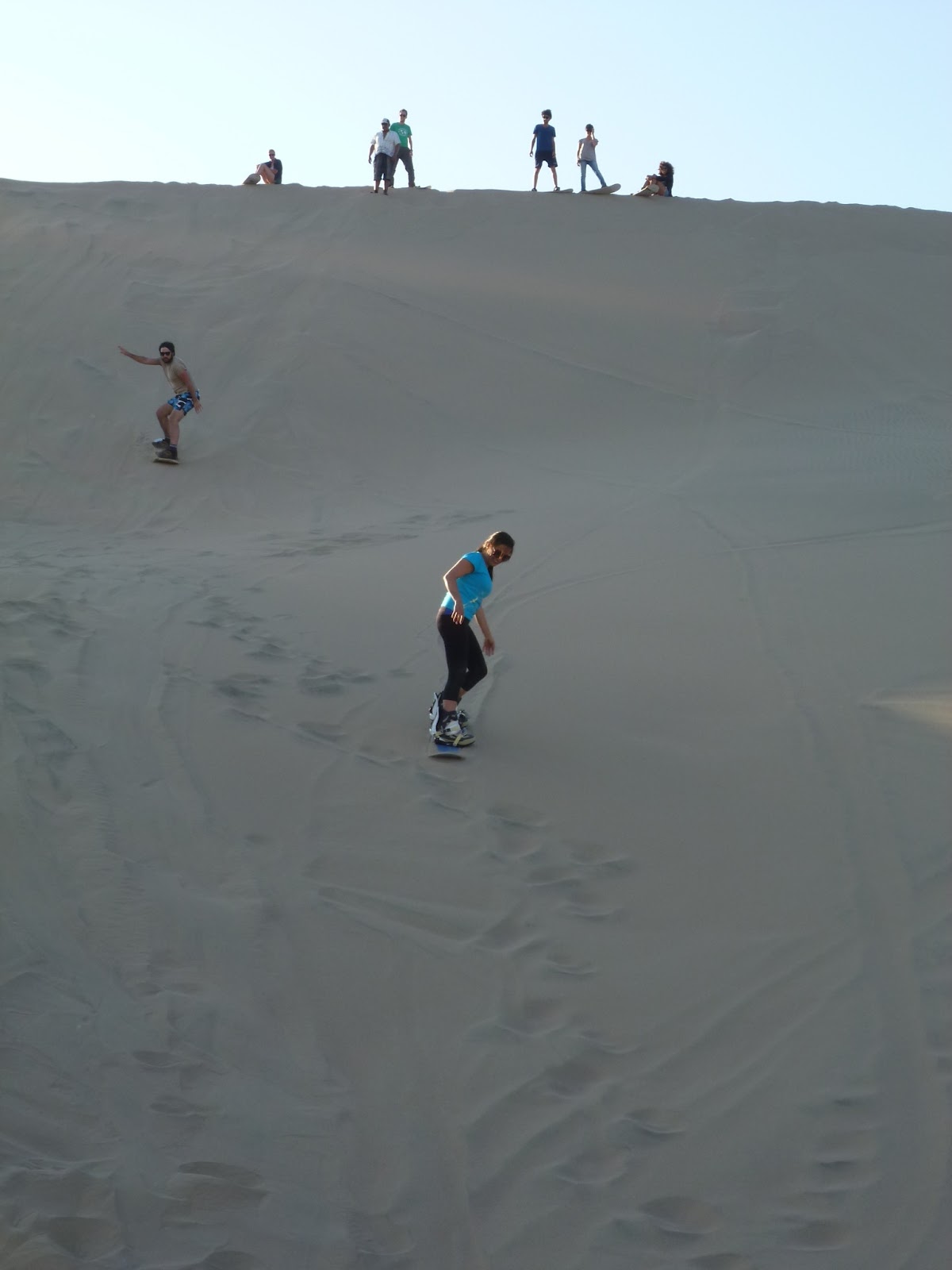 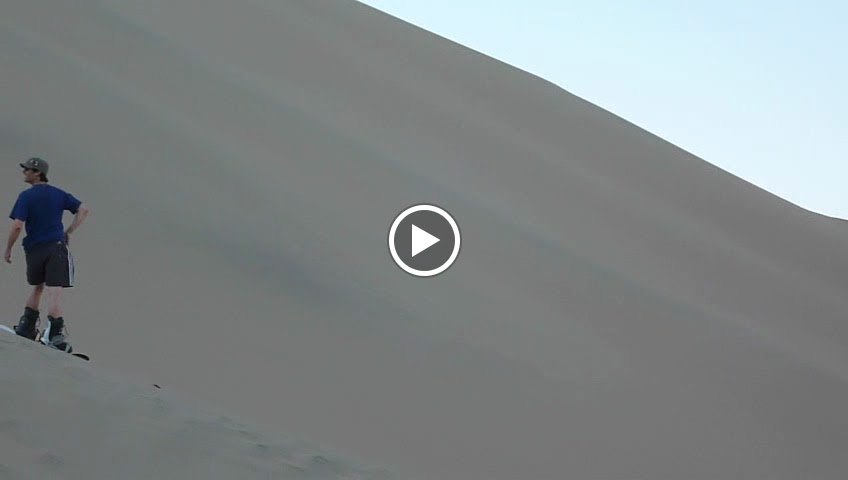 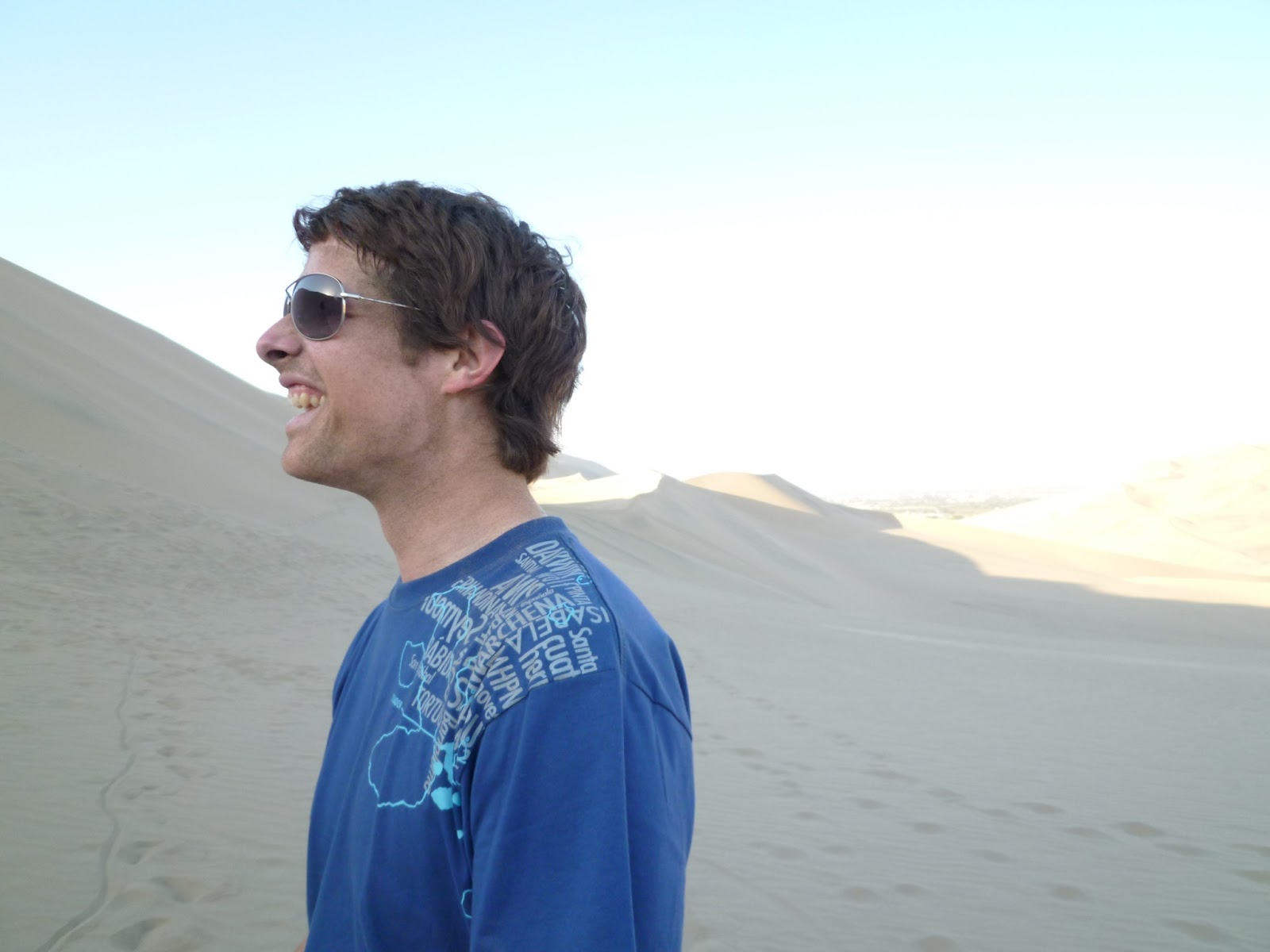 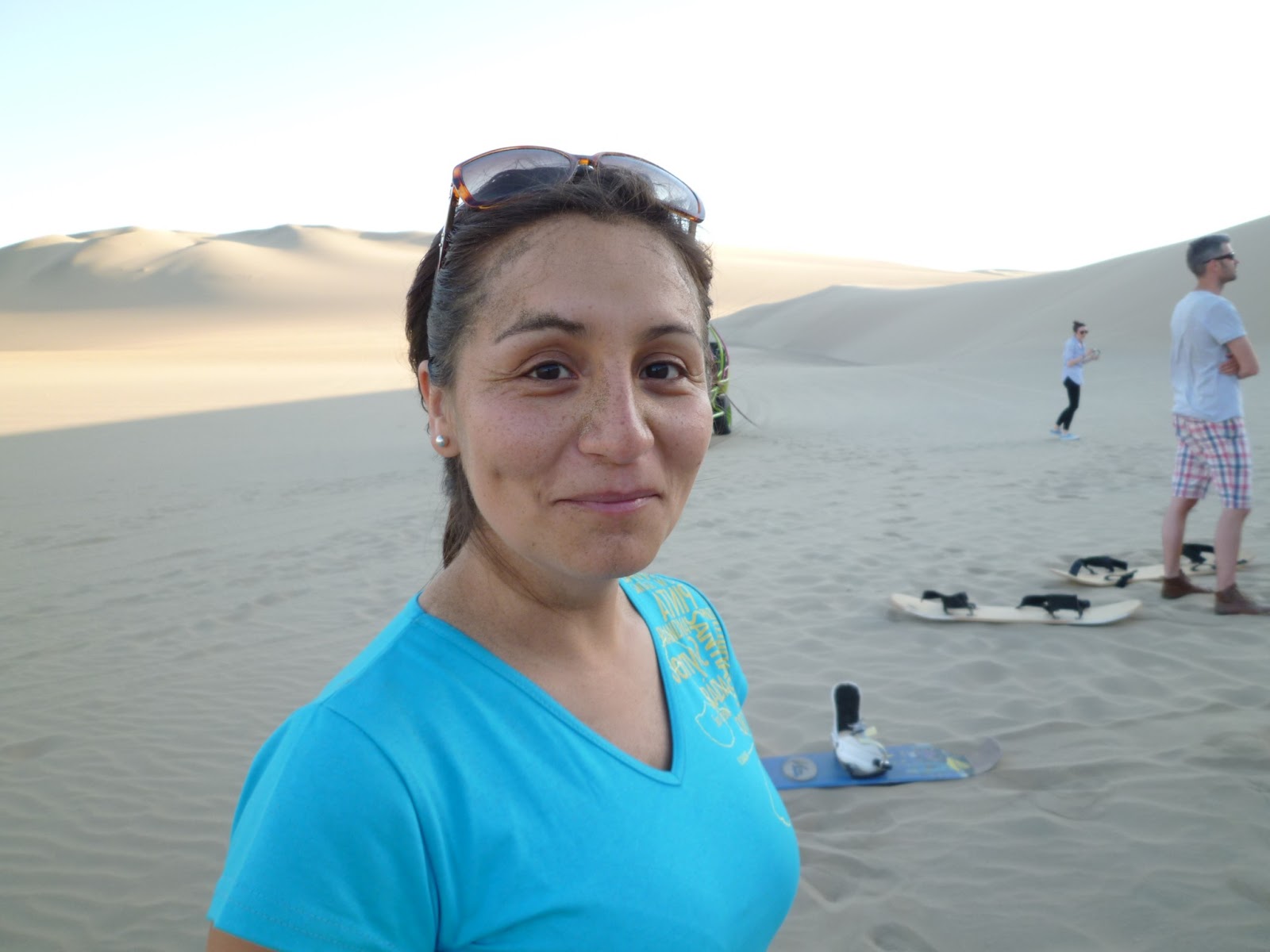 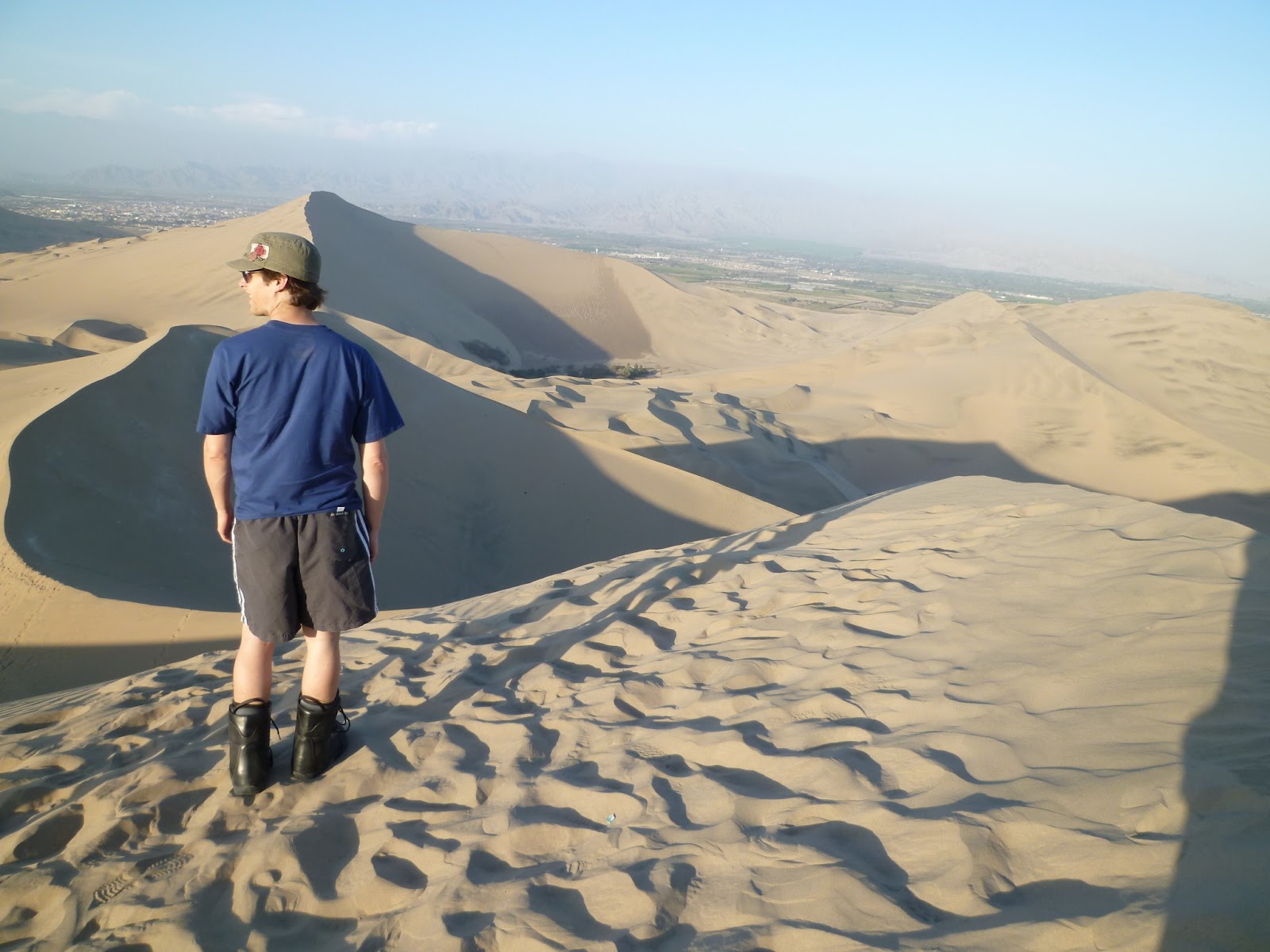 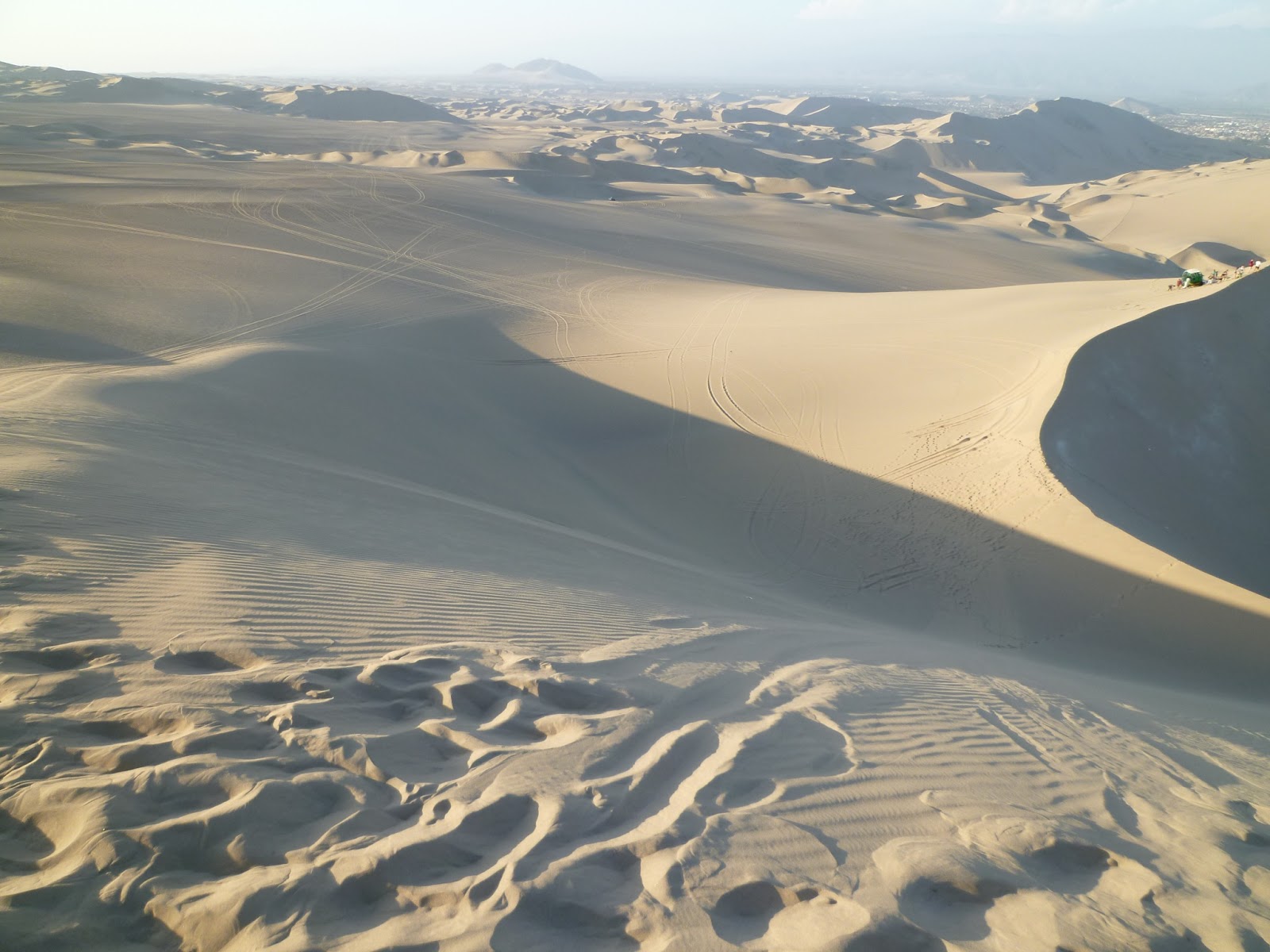 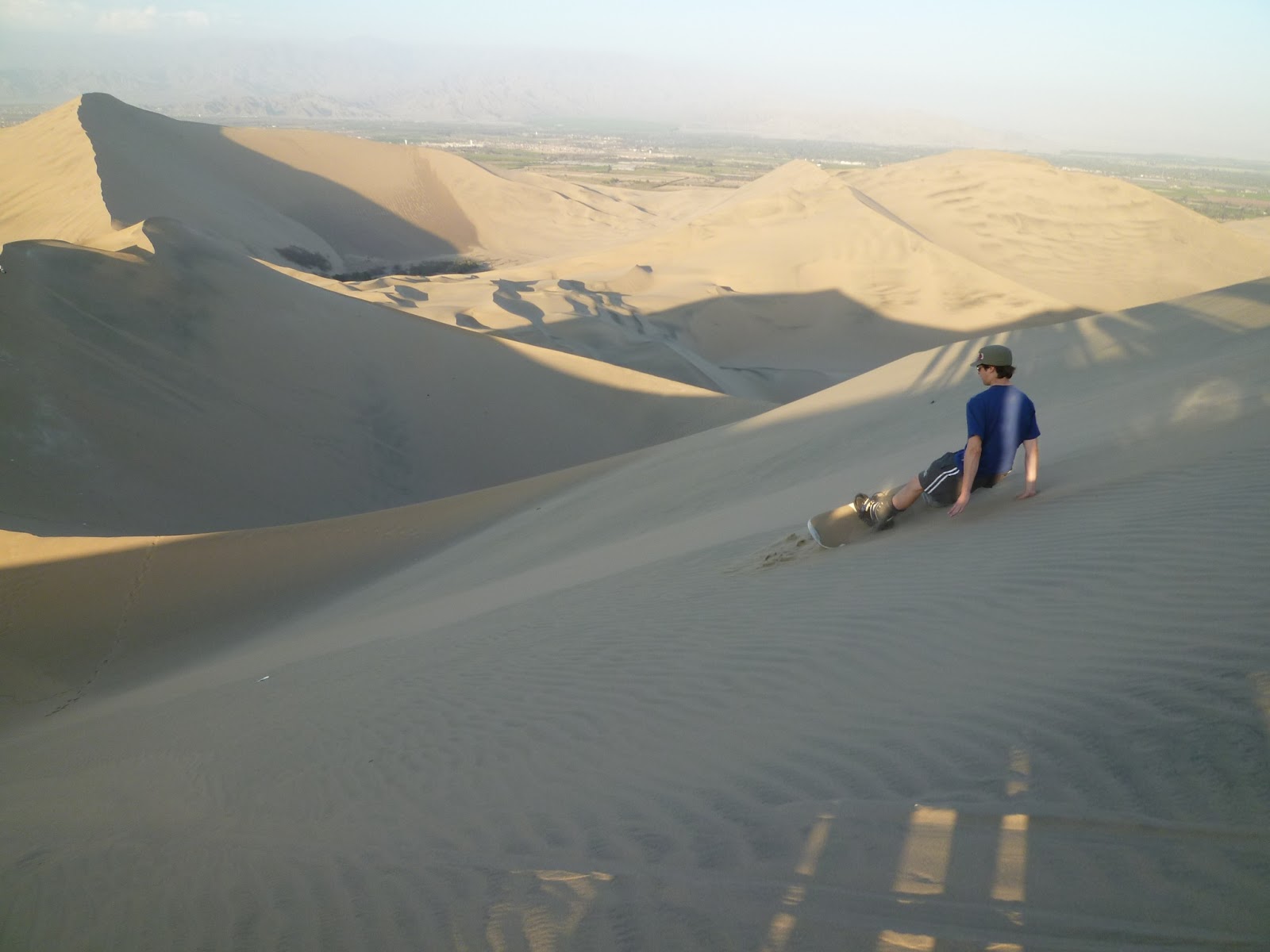 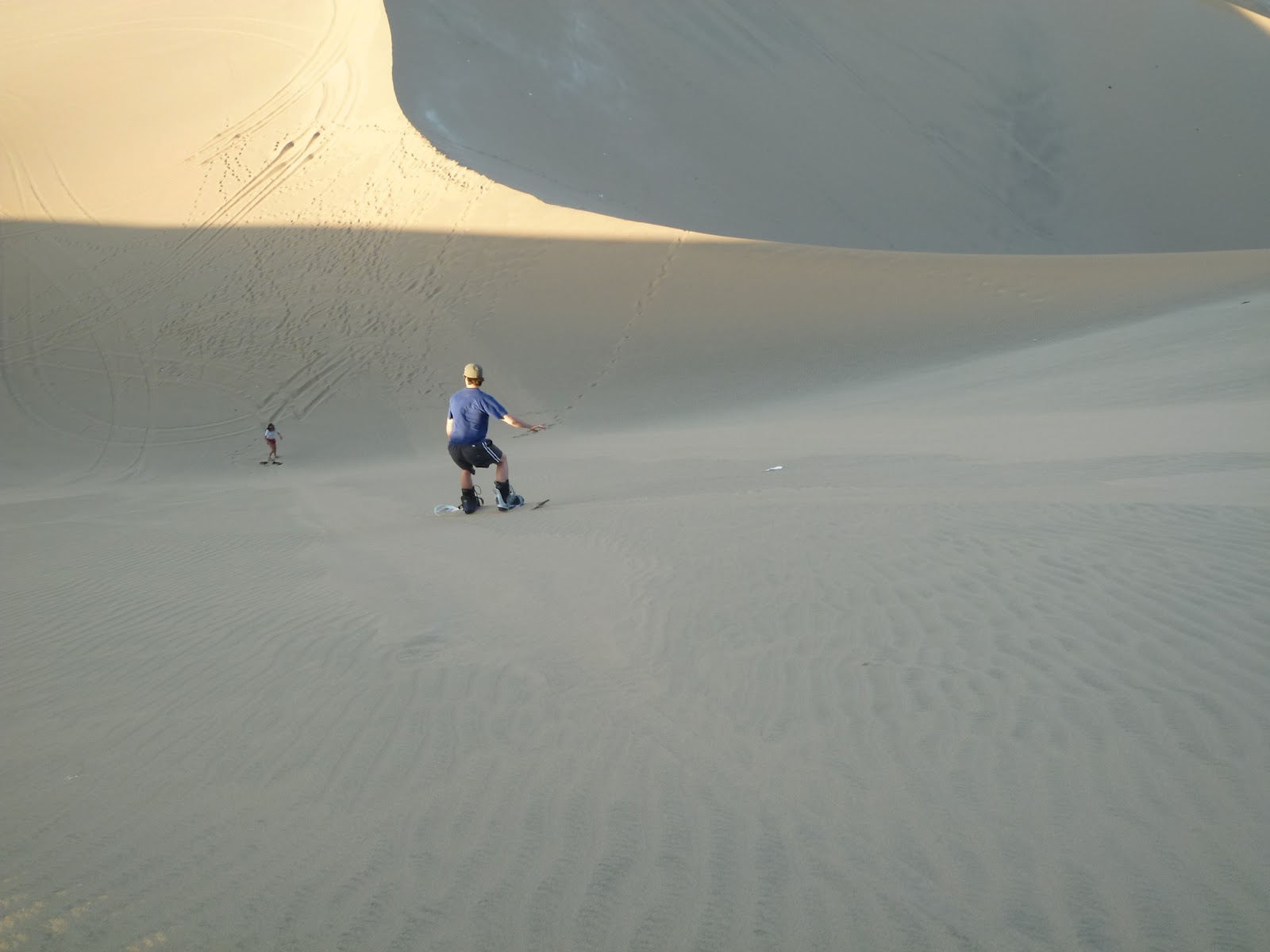 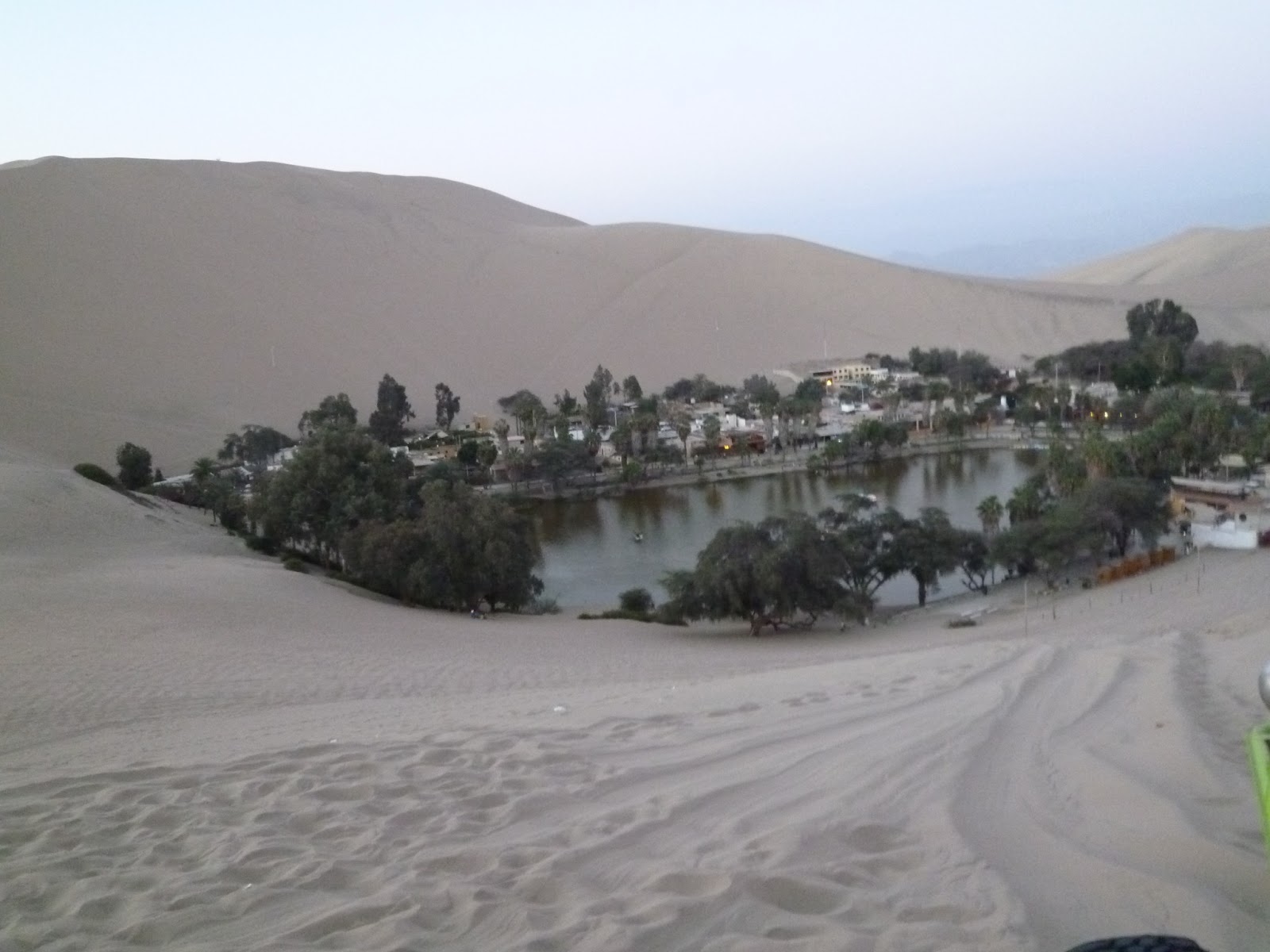 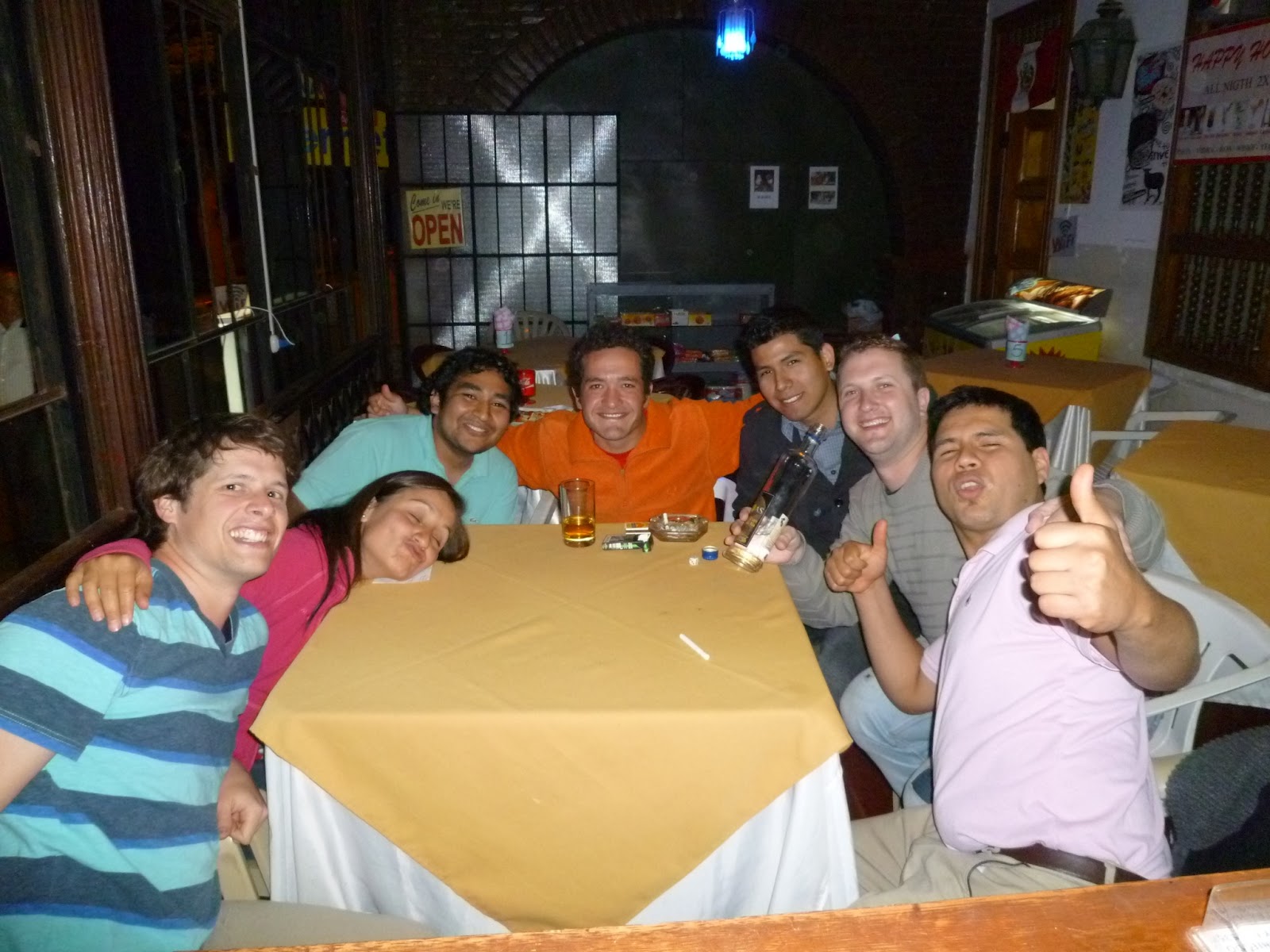 Oh you would never guess what happened on this day. Everything was going normal and as planned; we had lunch at a restaurant where we were invited to have some pisco (Peruvian traditional spirit) with the waiters in the night after the dunes tour.

The rest of the day we were just chilling by the hotels’ pool and hammocks until it was time to leave for the buggy ride. We put the snowboard boots on and hopped into the buggy. Huacachina is an oasis in the middle of the dunes so we took literally 5 minutes to get to them and the driver speeded up, it felt awesome, like a mini roller coaster.

Then he left us at the top of one of the dunes and got all the sandboards out and down we went. It was nothing like the snow, not so slippery but still extremely fun. I’ve never done snowboarding before so I just got on the board and threw myself downhill, it was not so steep. Bernd was pretty good.

The next dune was a bit higher and steeper, I got scared when the first guy just jumped but he arrived safely, I decided I wouldn’t allow fear to freeze me so I went next. The video of those first seconds will be mysteriously erased; I didn’t even advance a meter and already I was on the ground, it was embarrassing, and I couldn’t get up, but after a struggle I did and again I just threw myself; this time like the first, I just went for it and only stopped because of the fall, my mouth was full of sand, I spited it out, got it off my eyes and face and realized my knee was in a lot of pain, almost the same pain I felt when I had broken my knee on February of this year, only the pain was a bit stronger.

Bernd continued and also fell but he was ok, he arrived to the bottom with a sand beard, it was hilarious. I didn’t continue the rest of the sand boarding, but Bernd did and he was rocking it. We got on the buggy again and went for another ride through the dunes, it was awesome and a lot of fun.

When we came back from the tour I could hardly walk, but anyway we went to the restaurant with the waiters and after a pizza we started to drink a bottle of pisco in shots. We were 4 in the beginning and it was a dice game so I was losing a lot together with one of the waiters, I stopped drinking then and he only lasted to the second, after that he puked inside the restaurant while his boss was making fun of him. Another three guys joined since the second bottle, two Argentinians and another Peruvian one. The Argentinians left without paying anything, -a pair of free loaders- but still we had lots of fun and Bernd was wasted, he even wanted to go out and search for the Argentinians to tell them they should go back and pay their part.

Oh and yes, my knee was not broken, but I have ligamentitis, which means my knee ligaments are very swollen and I need to wear a knee pad for some weeks. But anyway, it was the last days of our trip and we only have Lima left so I guess it could’ve been worse.